Dr. Carter Ward practices General Dentistry here at our Lewisville and Wilkesboro offices, with a special focus on CERAC crowns and dental implants.

Dr. Carter Ward was born in Gastonia, North Carolina. His connections to the Piedmont and coastal NC regions are strong as he spent his childhood in several small towns throughout the state. His father was employed with Burlington Industries and as a result, Walnut Cove, Maiden, Fayetteville, Lumberton and Hickory could all be called Dr. Ward’s home towns. After graduating from Lumberton Senior High School, Carter received a Bachelor of Science degree in Biology with a minor in Chemistry from the University of North Carolina at Chapel Hill in 1999. As an undergraduate, he worked in the UNC Dental Research Center testing novel composite resin materials with Dr. Steven Bayne and Dr. Jeffery Thompson.

After completing his undergraduate degree, Dr. Ward obtained his DDS from the University of North Carolina at Chapel Hill School of Dentistry in 2003. With his wife Melissa, a clinical pharmacist, Carter moved to Wilmington, North Carolina. While in Wilmington, Dr. Ward entered into private practice as a solo practitioner. Throughout his 9 years in private practice, he kept a commitment to continuing education and community service. In March 2006, he completed a 9 month mini-residency in Implantology from the Misch Implant Institute in conjunction with Temple University. In addition, Dr. Ward completed leadership training at the Scottsdale Center for Dentistry in Arizona. He has also trained extensively with soft tissue lasers and CAD/CAM technology.

Dr. Ward routinely places CEREC crowns (restorations that can be completed in one visit).

Dr. Ward maintains membership in the American Dental Association and the North Carolina Dental Society. He is active in his support of Lower Cape Fear Hospice and the Jim “Catfish” Hunter chapter of ALS. For the past 5 years, he has been the presenting sponsor of their Walk to Defeat ALS / Lou Gehrig’s Disease Fundraiser.

Dr. Ward and his family are enjoying their transition into Winston Salem. Melissa is working at Forsyth Medical Center and their daughter, Caroline, is making new friends at her preschool in Clemmons. Dr. Ward is excited about being closer to the mountains. He is an avid outdoorsman and music fan. Along with the occasional music festival, he enjoys hiking the Appalachian Trail, camping, and fly fishing.
To learn more about Dr. Ward’s background and dental services or to schedule an appointment, please contact us.
Contact Us
Back to Meet the Doctors 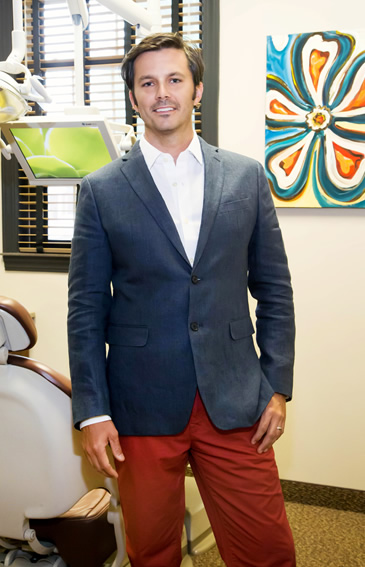 What Patients Are Saying

“I am so HAPPY I found an office my entire family can be seen at! I love that while my husband and I are getting our teeth cleaned, their BOARD CERTIFIED PEDIATRIC DENTIST can see my children at the same time! Perfect for busy families! From the moment you walk in the door, you feel like you're family here! The providers take amazing care of us and the business team always has a smile on their face! We love SDA!”

Lewisville Dental Patient
“This is by far the best place for your child! (And yourself) They were so patient and kind to my son and I couldn't have asked for more!!! Just a wonderful staff to be surrounded by!!! Dr. Tabatha, her assistant, front desk staff, literally every single person was helpful and amazingly pleasant. My husband and I are also going to start attending this facility. This is seriously the best environment for a dental anyone could imagine!!!”

Advance Dental Patient
"I can honestly say that I always have a good experience at the office in Wilkesboro. The Dentist and the associates are so friendly, caring and knowledgeable. I know I am going to get taken care of in a professional and timely manner. I appreciate everyone in this office."

Wilkesboro Dental Patient
"I've been a patient at Southern Dental for several years now. I have had no complaints. Great team. They get you in and out as quickly as possible. I hardly ever have to wait and they are kind and courteous even at the front window. Nice people, nice setting, nice results. Couldn't ask for more."

Wilkesboro Dental Patient
“This office does a great job at making you feel right at home! You are greeted by friendly, smiling faces as soon as you walk through the doors. The staff and doctors do an excellent job at explaining everything from the procedures all the way down to insurance payments. I am so thankful to have found such a wonderful group of dental providers!”

Lewisville Dental Patient
“Everyone I encountered was wonderful. I felt welcomed and appreciated. I never felt like just another patient. Staff went out of their way to be accommodating and helpful. I got the feeling that the staff genuinely like each other and worked well together. Having a medical background makes me recognize and appreciate really good patient care. YOU GUYS ROCK. Thanks to each of you for making my first visit so pleasant.”

Lewisville Dental Patient
"Dr. Tabitha is so wonderful. She is so patient and compassionate. I have been coming to SDA for awhile now and I will recommend them OVER and OVER to everyone I know. They do a fabulous job and the entire staff is phenomenal. Wait times are minimal and they always go above and beyond to meet our needs. They are AMAZING!!! Thank you DR.TABITHA for providing such remarkable care!"

Advance Dental Patient
"I had a dental emergency for my 9 year old son and they took such great care of him, accommodated us, helped make sure he felt no pain and calmed his anxiety. They are all very friendly and caring. We even drive over an hour to go to Southern Dental for pediatrics and adult dentistry."

WE HAVE YOU COVERED!